Maybe I'll try to conjure us a February thaw next.
Posted by Unknown at 7:05 AM No comments:

Mostly, I mean physical illness, not the current slang of something wonderful being called 'sick.' But now that I think of it, the second meaning is kind of apt, too.

I spend a lot of time being sick. A lot of days I end up laying on the couch, just looking up at the ceiling. Which makes me wish our ceiling was more interesting. Some 'sick days' I'm in too much pain to write at all. But on most sick days, writing is about the only thing I can do.

Sickness for me means fuzzy-headedness. It means sleeping much of the day away. It means that every muscle in my body feels like it's being squeezed in one of those old fashioned clothes wringers, sometimes to the point that the only relief I can get is from crying. I try not to do that often, because it scares my husband, even though he should be used to it by now.

I wasn't always this way. I wasn't always sick. I was normal all through high school and college and working various jobs until law school, and all through law school. When I was in my 30s, I'd gotten my law degree and had landed my dream job. I was a Managing Attorney for the Connecticut Legal Rights Project, which meant I spent my days trying to make sure my clients exiting the state hospitals, some after 20 years of being on the inside, got decent housing, and appropriate clothing, and maybe a job washing dishes. Or I'd try to keep them from being forced to take medication they couldn't tolerate, or being restrained too much while they were still on the inside. Or I'd be in meetings with doctors who needed persuading that my clients (and theirs) were indeed human. I loved my job. I had great colleagues. I really looked forward to going to work every day, then walking my dogs or riding my horse after work.

Then one day, I couldn't get out of bed. I literally could not pick up my head. I thought maybe it was the flu. After awhile, since I seemed to be too weak to walk, I crawled to the phone and called in sick. Then I slept and slept. I called in sick the next day, and the day after that. My muscles began to ache terribly. Then suddenly I couldn't remember simple words. I started calling things by the completely wrong names. 'Cup' became 'lamp.' "Can I have a lamp of tea, please," I would say. "Get me my apple," when I meant my book. It would have been funny, if it hadn't been so terrifying. I didn't know it, but sickness would shape my life from then on.

I lived in Fairfield County at the time, one of the wealthiest places on earth. Which meant the doctors were top-notch, up on all the latest. Which was good, since this was the '80s, when illnesses like fibromyalgia and chronic fatigue syndrome were barely blips on the medical radar. The doc I went to diagnosed me in minutes, though. I was so lucky. I didn't have to go through years of being told I was depressed, or else just plain lazy.

Yet the fact remains that there is no cure for this sickness. I've experienced a few 'remissions' when I've felt really well for months or even years. But it always comes back, that particular kind of pain, that malaise. Some random days I am normal. I think clearly. I have loads of energy. And no pain. Those days I feel like I'm 25 again. I have maybe one or two of those days a week right now. The other days I force myself to function marginally. Or I lie on the couch and cry in pain, when I'm at my worst. It's a continuum. Unpredictable. It smites me.

But I can write.

I can't really plan anything. I've had to miss: Tom Hanks on Broadway, Rene Fleming on New Year's, more trips to museums or parties or the beach or birthdays or Christmases than I can even count. I think of all I could have done with all the energy I might have had if not for being sick, and it makes me want to weep with frustration. But then I think,

I can lie on the couch of pain and be in pain, constant pain, and be fuzzy headed and unable to call things by their correct names, but by God I can write. Pluck the correct words from the universe and set them down, no problem. I can't talk, but I can write, one of the brain's little jokes. It's my cross to bear and my salvation too, this sickness. For without it, I might not have ever written anything but briefs and memoranda and grocery lists. Now I write novels.

So I am thankful for sick. Although I could now be safely shed of it, and still be able to write, sick has given me a treasure. It is sick, in the vernacular. I am sick. But I write, I write I write.
Posted by Unknown at 5:27 PM No comments:

Shut Up And Listen

Here's my convoluted answer (which I did NOT outline before writing):

I bring my 92 year old mom to church most weeks. Our church looks kind of like this right now: 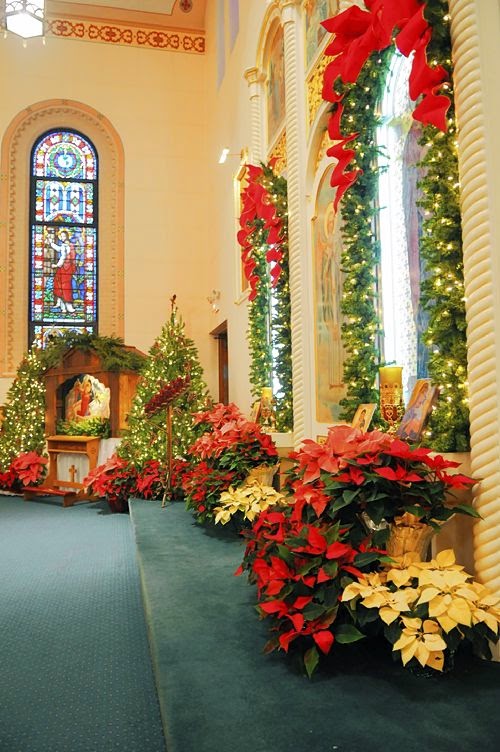 Sorry I couldn't take a photo of our actual church, which is really much more ornately decorated with poinsettias, to the point that the visiting priest made a crack about it being the Second Sunday in Ordinary Time already, and when are the Christmas decorations coming down? The answer to that would be almost Easter, or whenever the poinsettias die. What can I say, Polish people get a kick out of ornate decoration. Myself included. But I couldn't take a photo because my mom was pulling at my sleeve, saying, "Don't DO that! Someone will see!" I forbore to say that was the point, and let her lead me out into the freeze, sans photo.

Anyway. The first reading today was from the Book of Samuel. I didn't even know there WAS a Book of Samuel. I had never heard of him. He was some prophet, apparently. But I felt a certain kinship with him, and I think his story can explain what writing is like for me. When he was just a kid, he was hanging out with a guy named Eli, and they were asleep in the house of the Lord, where the ark was (of the covenant, not Noah's ark, although I still don't know why the ark of the covenant was in the story). Samuel gets woken up by a voice calling him, so he goes to Eli and says, "You called me, here I am." But Eli tells him, "I didn't called you. Go back to sleep." So Samuel goes back to sleep, but before long, he hears a voice calling "Samuel! Samuel!" So he runs over to Eli again, and Eli says, "Shut up, I never called you. Go back to sleep." This happens a few more times, then Eli finally realizes it's God calling Samuel, so he tells Samuel what to do. The next time Samuel hears the voice calling, he says, "Speak, for your servant is listening." And after that, God told him all kinds of stuff, and made sure everyone believed him.

Writing is kind of like that for me. What I need to write comes to me. I have an idea of what's supposed to happen next, but then it is as if the story just flies into my head. Or not even that, it flies into my writing hand. Nearly every day I say to the universe, or to God, or whoever, "Speak, for your servant is listening." And most times, I get an answer. Not to say that my writing is in any way exalted. I just listen for the story, and I write it down, whatever it may be. But I can't force it. I can't outline it. I just have to shut up and listen.
Posted by Unknown at 3:58 PM No comments:

WHAT IT'S REALLY LIKE HAVING YOUR FIRST BOOK PUBLISHED

I am drinking my third cup of tea today -- Everest Dark Heart 2014 Spring Pluck (yes, I know the names of the teas I drink, but not much else) while trying to do some catching up on this blog.

I had every intention of doing the blow-by- blow-every-moment -of-book-tour-and-beyond thing, but really? What does it REALLY feel like to have a first book come out? For me, while it was happening it was kind of a big exciting blur, or a small and quiet blur. I had audiences of from 75: 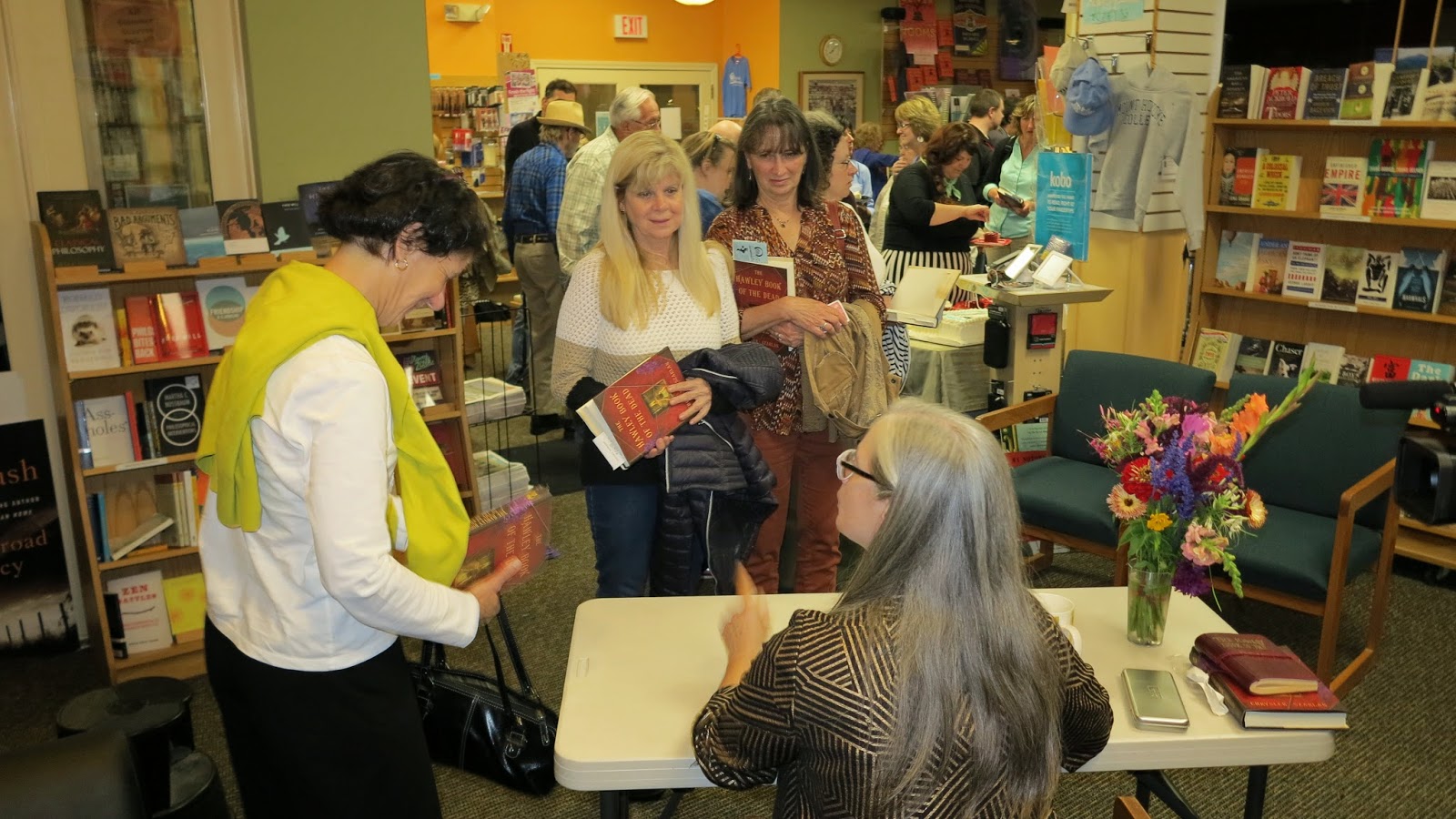 to 3 (including the bookseller and the guy who came in out of the rain) and everything in between. I spoke at a literary festival (thank you Brattleboro!) and sold books at a general store (thank you Elmer's!), a few libraries (Agawam MA and Germantown NY, thank you!) 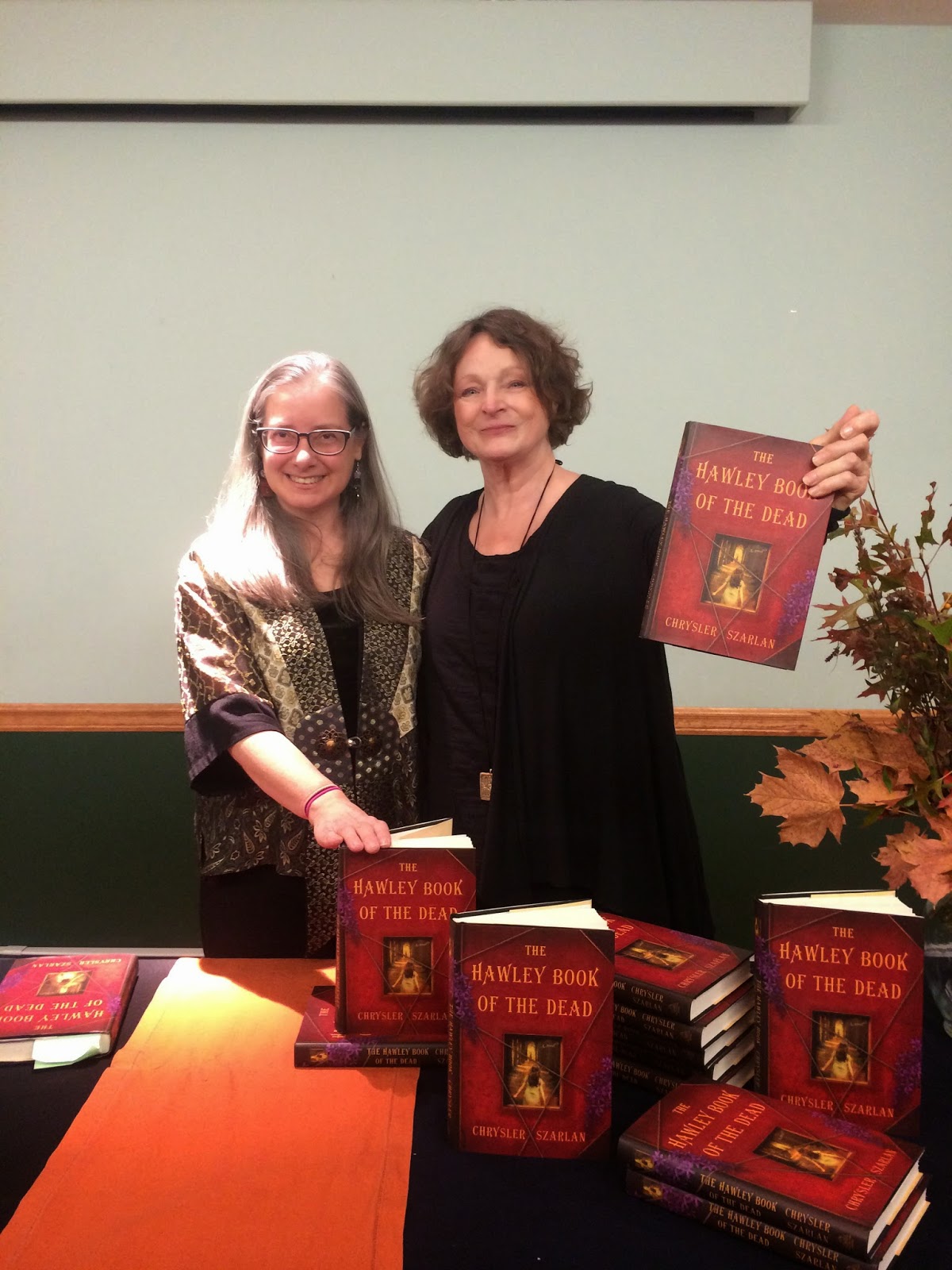 And of course, indie bookstores (thank you Odyssey, Riverrun, Boswell's!). I did some live and taped radio events -- those were super fun (thank you Bill Newman, Joe Donahue!)!

Then I came off my horse.

He spooked, spun and bolted, very unlike him) just before Thanksgiving. He's really very sweet. 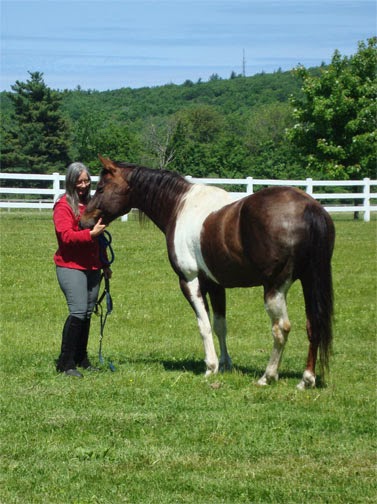 We just had a bad, windy day. But it took the stuffing out of me, let me tell you.

And it was only then that I finally had time to lie on my heating pad for weeks and reflect.

Thus, it's only now that I CAN FINALLY TELL YOU WHAT IT'S REALLY LIKE TO HAVE YOUR FIRST BOOK PUBLISHED:

IT'S WEIRD. You spend so much time alone with your book, your laptop, your pink legal pads, all in the act of creation. Then you get lucky enough to sell your book, to work with an editor, to start sharing your book with design people, with marketing and publicist people. Then the book is printed and gets sent to you in big boxes: 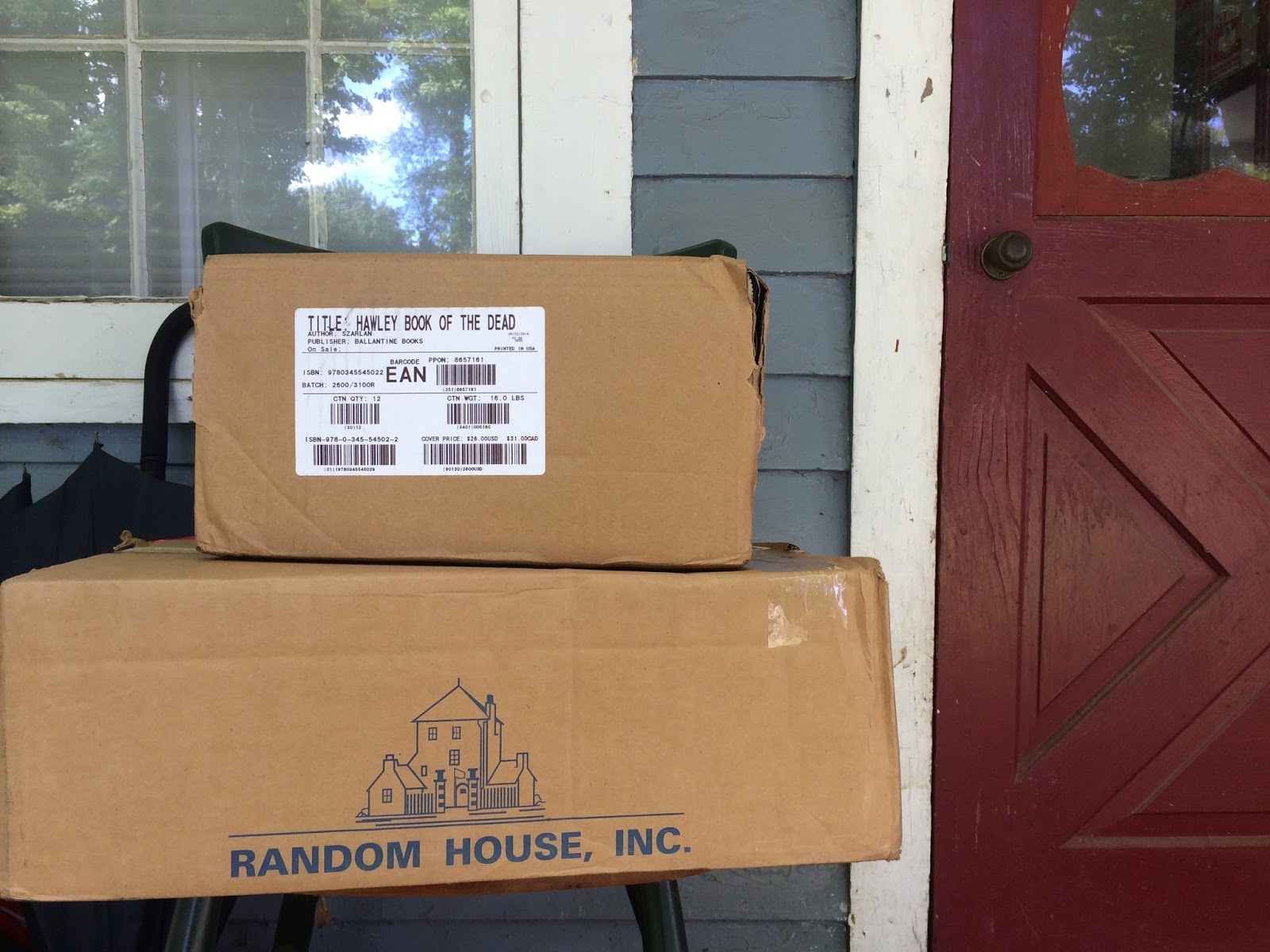 And it is a real live beautiful THING, and there are stacks of YOUR BOOK in bookstores: 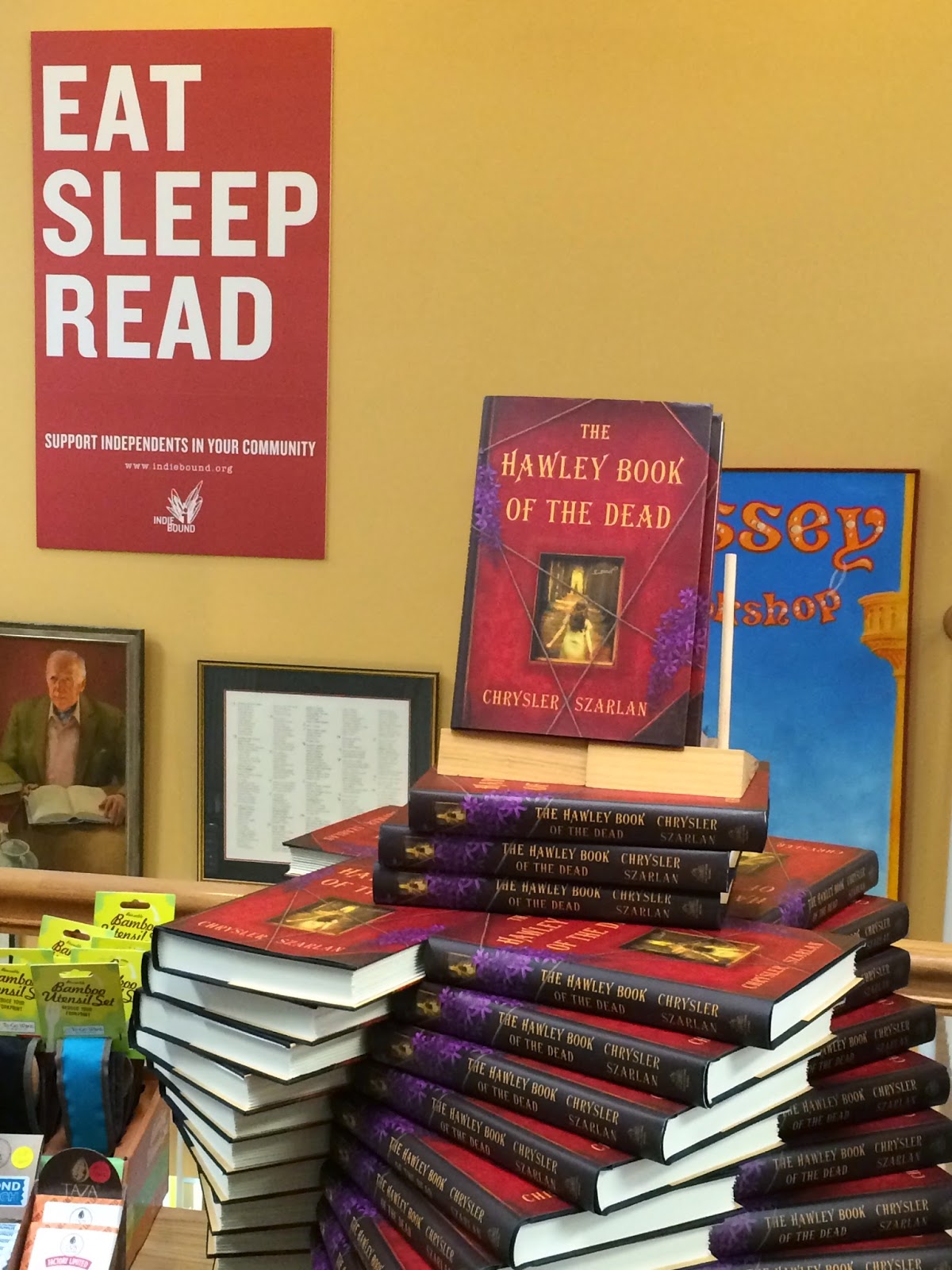 And then you get to do events, and go around and talk to people about your book.

Then just as you are getting used to doing them, you are thrown from your horse.

Which is another way to say, "Time to get back to real life. Time to get back to your laptop and your pink legal pads, and the silence that writing requires. Not talking. Not driving to all kinds of fun places. Not gazing raptly at the cover of your now published book for big whacks of time. It's time to write the next one.

So. That is mostly what I'm doing now. 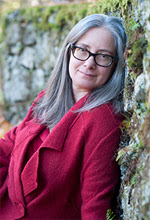